The new heptagonal coin replaced the 10-shilling note – although would be used alongside the old currency until 1971 when the 240p-per-pound system was replaced by a simpler 100p pound.

OCTOBER 14, 1969: The first ever 50 pence coins were introduced on this day in 1969 – and caused instant confusion as Britain began its journey towards decimalisation.

It replaced the 10-shilling note – although it would be used alongside the old currency until 1971 when the 240p-per-pound system was replaced by a simpler 100p pound.

But, despite its novel seven-sided shape, the 50p coin was often mistaken for both the old half crown and new 10p piece while the two systems coexisted.

One Londoner told the Evening Standard newspaper that he accidentally left a 50p coin in a saucer full of 10p pieces as a tip for a waiter.

‘Fortunately the waiter was dead honest and told me. But I suspect there’ll be a lot of cases where that doesn’t happen,’ he said.

To add to the confusion, the heptagon had the image of Britannia on one side – just like the old penny, which had remained the same since the early 18th century.

The newly-introduced seven-sided 50p coin in 1969. (PA) Retired Army colonel Essex Moorcroft formed the Anti-Heptagonists, who objected to the coin as ‘ugly’ and ‘an insult to our sovereign whose image it bears’.

MPs also joined shopkeepers, bus workers, housewives and the elderly in protesting against the piece and demanded that either it or the 10p coin be changed.

However, its bold design also won many plaudits and generated tremendous excitement when it was introduced.

A British Pathé newsreel showed the copper-nickel coins being made, with the distinctive design stamped on them at the Royal Mint at Tower Hill, London.

The process was supervised by Lord Fiske, chairman of the Decimal Currency Board, who revealed that that the 50p piece was the only heptagonal coin in the world.

It was the third decimal coin to be introduced after the 5p and 10p pieces were all launched in 1967.

At that point, there were three other new coins yet to be minted – the 2p, 1p and half pence pieces.

The government held off introducing them since, unlike the others, they did not roundly convert to the old pounds, shillings and pence – symbolised by £sd.

And, later, many people complained that these coins gave shopkeepers the excuse to raise many of their prices.

😉 … I think this story demonstrates how little people like change (ha!ha! pun fully intended!) Click on the link below to read the original story on Yahoo UK.

I found this story on Yahoo! today, well it certainly makes a change from the “Jesus in my baked beans” stories that you find around the net, don’t you think?  😉 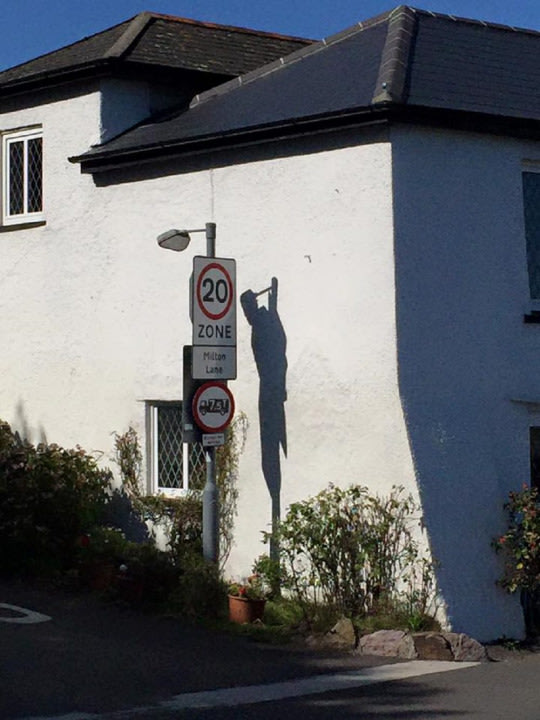 Residents have been left seriously spooked after the shadow of a “hanging man” appeared on the wall of a house – where a gallows used to be.

The somewhat sinister image was created by a combination of a high midday sun shining on a 20mph road sign and some say it bares an eerie resemblance to someone hanging from a rope.

Locals said it was extra spooky as it has appeared at a crossroads which was once the site of a gallows where traitors were hanged.

“A lot of people who even live on that road say they have never seen it before. It is an area known as Dead Man’s Cross and is where a gallows used to be. I think they used to hang traitors there. The location has a lot of history and it certainly sent a chill down my spine when I saw the hanging man. There has been a great response to it and the picture certainly seems to be getting around. I’ve lived in Dartmouth for 18 years and neither me or my family had ever heard or seen this shadow before now. I must have just got very lucky.”

George, 24, took the picture last Thursday and has been fending off accusations that he photoshopped the image.

Since he posted his picture other local residents have visited the site and gone on to post similar images.

George said: “Some people thought it was fake but a couple of others have gone down there themselves to check and posted similar pictures.

“Why would I spend my time Photoshopping a shadow? I have a life.

“If anyone thinks this photo isn’t real head to Dartmouth around midday on a sunny day and have a look.”

Click on the link below to read the original story.

(Ok, so apologies before hand – this is going to be a rant post)

I don’t want to link all my online profiles, thank you very much.

I don’t want everybody knowing everything about me; what I’m doing or where I going (both online & in real life).

Not every thought that I have is suitable to every person I know.

What I mean is – I have many people in my life; I have a good number of work colleagues, I have friends & acquaintances that I’ve met because of my children and/or hubby, my interest, hobbies and participation in online forums & groups have also resulted in strangers that I now call friends because although we’ve never met in real life, we have been a part of each others’ lives and I am lucky to have a small number of best friends who have been there for me when times were tough and held my hair when times were (too) good! Lol!

All these people in my life know me in varying degrees; it’s down to me whether I decided to tell my boss/mother-in-law if I was out on the

lash (hubby-less) with my besties at the weekend… (and let’s face it that conversation will never happen!)

I know some of you reading this will point out that that’s what the security options are there for, I can go into my settings and list who sees what on Facebook, which accounts/profiles are linked to which, etc. Yes, you’re quite right but I’m struggling (please tell me I’m not the only one), the privacy settings keep changing far too frequently for my liking. *sigh* I’m finding it easier to just keep some stuff separate but how much longer will I have this choice???